Terrorist groups carried out systematic acts of destruction and sabotage against artefacts of the Archaeological Museum in Bosra al-Sham city, in addition to conducting illegal excavation works with the aim of discovering archaeological treasures and smuggling them out of Syria.

Head of the Directorate General of Antiquities and Museums, Mahmoud Hamoud, said that a team from the Directorate of Antiquities visited Bosra city and inspected the situation of its archaeological sites, pointing that illegal excavation work took place in the Old City causing huge damage to its parts, in addition to the destruction of several archaeological buildings. 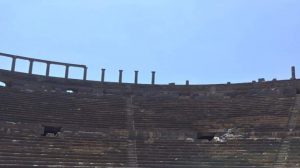 He added that the terrorist groups also stole the contents of the Archaeological Museum, indicating to the difficulty of estimating the total artefact content uncovered by those terrorists in different sites of the city.

Hamoud underlined cooperation between the Directorate and Bosra Department of Antiquities in order to document damage and set up plans to rehabilitate terror-affected archaeological buildings after the end of military operations to canvass the city and dismantle landmines and explosive devices planted by terrorists.

He highlighted the importance of Bosra as a major archaeological site, containing ruins from Roman, Byzantine, and Muslim times. Further, a magnificent 2nd-century Roman theatre, temples, churches and mosques are found within its great walls.