Units of Syrian Arab Army restored control over Um al-Mayazen town, 10 km to the east of Daraa city, after eliminating the last gatherings of terrorist organizations.

A military source said that army units, backed by the allied forces, carried out intensive operations 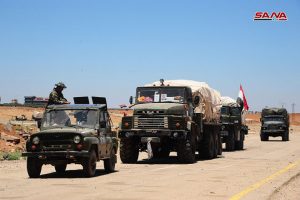 against terrorists’ gatherings and fortified sites in Um al-Mayazen town to the north of Nassib town near the Jordanian border.

The source added that recapturing the town came after eliminating a number of terrorists, destroying their weapons and equipment and seizing amounts of arms and ammunition.