More than 453 families are currently residing in the temporary makeshift center of Jbab town in the northern countryside of Daraa.

The families have been displaced from Nawa town and the village of al-Sheikh Saad due to the criminal acts of terrorists who assaulted civilians and took them as human shields.

Recently, the authorities opened three humanitarian corridors to facilitate the evacuation of civilians from the areas where terrorists are positioned. The first of 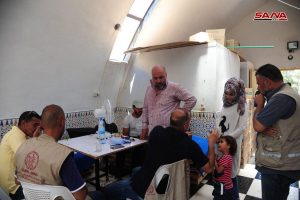 The evacuated civilians were transported to the makeshift center in Jbab.

Speaking to SANA, Head of the medical point at the makeshift center, Ibrahem Aboud, said that about 300 persons visit the point daily and that all health services, including the vaccines to children who missed some vaccinations, are being provided to them.

He added that the critical cases that require special care are being transferred to al-Sanamin Hospital or Damascus hospitals.

“The situation in the center is good as it provides all services of health, water and food.” A woman from al-Sheikh Saad said, hoping to return soon to her hometown.

A citizen from Nawa, in turn, 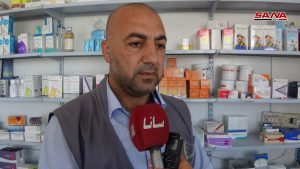 appealed the people of the city who headed to the Syrian-Jordanian border to “return to the places secured by the governorate instead of waiting on the border.”

“We will return very soon to our homes after cleansing them of terrorism,” the citizen said.

Since the beginning of the military operation in southern region, the various institutions of Daraa governorate, in cooperation with charity associations and locals, spared no effort to provide support to the displaced people in parallel with the local reconciliation process, which ensures the return of normal life of the villages and towns.

During the past few days about 30,000 persons in the town of Da’el in the northern countryside of Daraa have returned to their homes after the completion of the reconciliation agreement in the town