Hundreds of displaced Syrians in Lebanon return to Syria

Hundreds of displaced Syrians, who were forced to leave their country because of terrorism, returned from Lebanon to their towns in al-Qalamoun area in Damascus Countryside across al-Zamrani crossing. 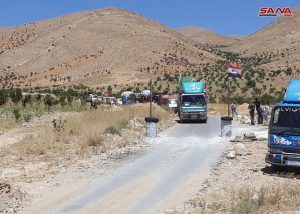 SANA reporter said that within the Syrian government’s efforts to restore normal life to the areas liberated by the Syrian army from terrorism, tens of families including 1000 civilians, mostly children and women, on Monday returned to their towns in al-Qalamoun area in Damascus Countryside.

The returnees were received by the Syrian Arab Army personnel and a committee to write down their personal data and addresses of their permanent residence in their villages and towns to follow up their affairs and provide them with assistance. 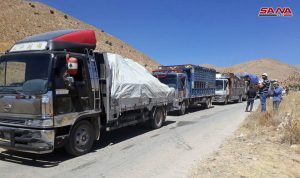 “Without a homeland, human beings have no dignity or future,” said some of the returnees, voicing their happiness to return.

They called on all the Syrians who were forced to leave their country because of terrorism to return to their homes and start a normal life and to contribute in rebuilding what terrorism has destroyed.

The returnees thanked the army for the great sacrifices it has offered to restore security and stability to al-Qalamoun area.

On July 7, hundreds of displaced Syrians returned through al-Zamrani crossing from the Lebanese town of Arsal, where a number of buses transported them to their homes in Damascus countryside.