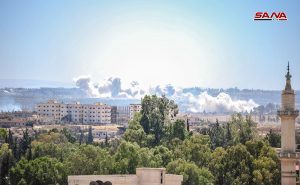 The strikes aim at cutting of terrorists’ supply routes coming from the eastern countryside of Daraa and the Jordanian border, as the neighborhood of al-Jumrouk al-Qadim controlled by terrorists is considered one of the most important transit points with Jordan.
SANA