Four civilians were martyred, including a child and a woman, and another 22 civilians were injured on Friday in terrorist attack with mortar shells carried out by Jaish al-Islam terrorists on the neighborhoods of al-Rabwah, Masaken Barzeh, and Mazzeh 86 of Damascus.
A source at Damascus Police Command told SANA that the terrorists of Jaish al-Islam fortified in Douma city fired mortars on the Masaken Barzeh neighborhood, claiming the life of a child and injuring 6 civilians, some of them having sustained serious injuries, not to mention the material damage to houses and public properties .
The source added that two rocket shells fired by the terrorists landed on a car in al-Rabwah district, wounded 9 civilians, some of them suffered serious injuries, and burnt a number of parked cars in the area.
The terrorists also targeted Mazzeh 86 neighborhood with three rocket shells, causing casualties among civilians and a material damage to houses, cars and shops, the source added.
SANA correspondent said that units of the Syrian Arab Army responded to the attacks by striking the areas from which the shells were launched, inflicting heavy losses upon the armed groups.
Medical Director of Mouwasat Hospital, Dr Subhi al-Bahari, told SANA that the hospital received a martyred woman and 14 injured civilians; two of them sustained severe injuries and sent to the OR as a result of the mortar shells which landed on al-Rabwah, al-Umawyeen Square and the Mezzeh 86. 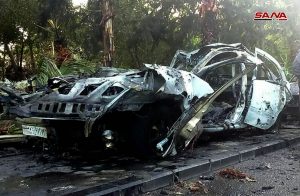 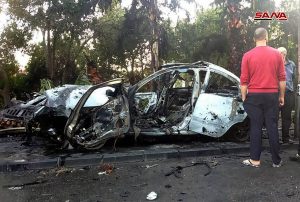