US Senator Richard Black said ’Monday that the Syrian Army and its allies have been able to expel terrorism from most of the Syrian territory, and nobody remained except those terrorists in Idleb who take civilians as human shields. 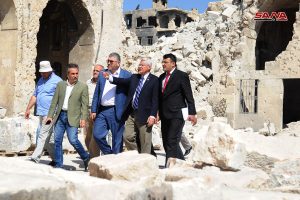 “The Syrian Army seeks to protect the civilians via safe corridors to evacuate them from the terror-controlled areas,” Black told journalists following his tour to a number of areas liberated by the Syrian army from terrorism in Aleppo.

He indicated that the US “has been carrying on a war against terrorism for 17 years, but there were no results.”

He added that the Syrian army carries on a war against barbarism, reiterating that Syria will rise with the efforts of its people.

The link was copied successfully.