An art group of 18 Syrian artists have started a magnificent art project, using underground tunnels dug by terrorists in eastern Ghouta as a setting for making artistic sculptures.

The project was inspired by sculpture works made by Muhannad Moualla, an artist and a fighter in the Syrian Arab Army who a year and a half ago has begun, at his own leisure, to turn walls in Jobar city near Damascus into sculptures. 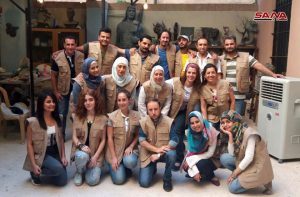 The idea originated back in winter 2017 when the Syrian army was repelling repeated attacks on Damascus city from Jobar, Moualla explains in an interview with SANA. Back then, he executed two works: the first inspired by the sacrifices of the Syrian army fighters, and the second was inspired by personal motivation. The works of arts went viral on social media, he recalls. 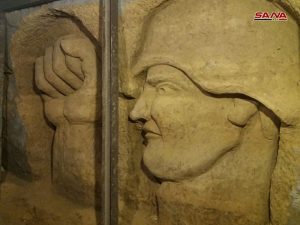 He explains that the material used in the tunnel sculptures was rocky soil, which is way less manageable than sand and clay. Using this material in work is classified as “direct carving” by reducing the existing block, making it impossible to modify the work upon completing it.

The liberation of Ghouta from terrorist organizations, which coincided with the Syrians’ celebrations marking Easter inspired Moualla to execute another work of art which he soon realized needs a team work of artists.

To that end, Moualla contacted as many as 60 sculptors using social media who sent him pictures of their works, picking 18 of them, including prominent sculptor Anas Qatramiz, forming a team called “Aram”. 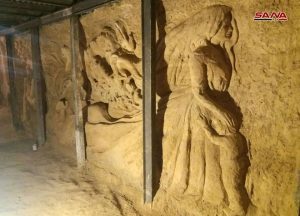 Moualla and Qatramiz then commenced to set a work plan, dividing work among the selected artists and identifying key ideas for works, mostly covering the sacrifices of the Syrian army, martyrs’ mothers, the ancient history of Syria and the Unknown Soldier. The selected artists were invited to a tunnel in Jobar neighborhood picked as a setting. 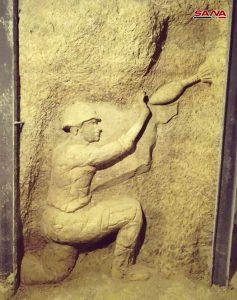 Asked why he has chosen tunnels as a setting for showcasing his works, Moualla said it sends a message that the Syrians are bent on transforming places that terrorists wanted as cells for spreading death and destruction into beacons of life and hope.