Prime Minister Imad Khamis said Syria is moving with confidence to the final victory over terrorism and the restoration of security all across the country.

Khamis was speaking during his meeting with a delegation from the Mauritanian Socialist Democratic Unionist Party, headed by Secretary General Mahfouz Weld Abdul al-Aziz.

During the meeting, Khamis affirmed that Syria has laid solid groundwork to revitalize economy, modernize laws, legislations and investment structure and to upgrade the financial and banking policy ahead of the rebuilding stage in the country, adding that it is looking forward to improve economic ties with the countries that have supported the Syrian people during war. 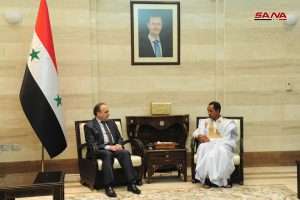 For his part, Weld Abdul al-Aziz relayed the support of the Mauritanian people with Syria against the terrorist war, the blockade and the unfair coercive economic measures, stressing the necessity of ratchetting up coordination between the two countries and invigorating mutual cooperation.