Upon the directives of Commander-in-chief of the army and armed forces, President Bashar al-Assad, and on the 73rd occasion of Army Day, Minister of defense, General Ali Abdallah Ayoub visited Wednesday a number of army units working in the southern region and met the field commanders and soldiers there. 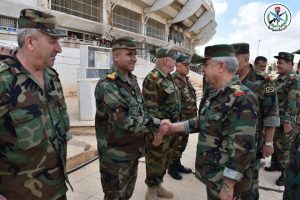 During the tour, General Ayoub conveyed President al-Assad’s congratulations and appreciation for the sacrifices and victories achieved by army soldiers all over the Syrian territory.

He was briefed by the field commanders on the measures taken to protect civilians, hailing efforts exerted by the army members, their high morals and firm faith in achieving victory.

The Defense Minister hailed the great achievements made in South Syria as proving the ability of the Syrian army to combat terrorism and fully eradicate it, stressing the soldiers’ combat readiness to carry out their national mission in defending the homeland against aggressors. 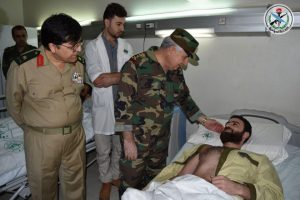 He also visited the injured army personnel in one of the military hospitals in the southern area and inspected their health conditions as well as the medical care provided to them, wishing them speed recovery.

American journalist calls on Biden to end US coercive…