Huge efforts are exerted by Damascus Governorate and various sectors in Jisreen town to rehabilitate and restore houses, shops and public facilities which have been fully destroyed due to terrorism, paving the way for the return of more families to the town.
SANA reporter interviewed a number of the locals in Jisreen town who expressed joy over returning to their towns and starting to rehabilitate their houses and shops destroyed by terrorism, pointing out the need to speed up providing the town with the necessary services.
Soubhiya al-Nabki, a citizen from Jisreen, pointed out the importance of rehabilitating the health center and providing medicine, adding that the situation is improving gradually after electricity was restored. 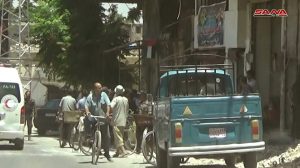 Jisreen Mayor, Samer al-Nabki said that up to 1300 families have returned to the town after removing the debris, cleansing streets and supporting some of the locals to rehabilitate their houses and shops.
He clarified that Damascus governorate is meeting the citizens’ needs gradually as electricity has reached 50 percent of the citizens and Damascus- Jisreen highway was opened, adding that work is underway to settle the legal status of those who returned from makeshifts centers to join the compulsory military service.
The Education Ministry has begun rehabilitating three schools to be put in service for the upcoming school year, al-Nabki said.