Locals of Aleppo, Idleb and Hama countryside continue to head back to their liberated areas

Tens of families coming from terrorist-controlled areas in Idleb returned on Saturday in big numbers via Abu al-Dahour crossing to their villages and areas in Aleppo, Idleb and Hama countryside, which the Syrian Arab Army cleared of terrorism. 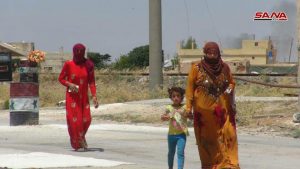 Since the morning hours, the families streamed through Abu al-Dahour crossing with their vehicles, equipment and personal stuff.
Despite the fatigue that was clear on their faces, the returning families expressed relief after arriving at the Syrian army’s points, thanking the Syrian army which restored safety and security to their areas.
Speaking to SANA, the families said that they had long waited for this moment because of the ill-treatment and humiliation they suffered at the hands of terrorists, indicating that they were forced to leave their houses and resided temporary in the areas in which gunmen are positioned.
The families stressed that they seized the earliest opportunity to return to their villages despite of the lies circulated by terrorists to frighten them and prevent them from returning.
A number of locals affirmed their determination to repair and restore what has been destroyed by the terrorist and plant their lands again.
SANA