Grand Mufti of the Syrian Arab Republic Ahmad Badreddin Hassoun met on Saturday a European parliamentary delegation, in which he said that throughout history, Syria has always been and is still a country of love and peace. 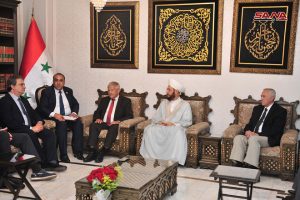 The Grand Mufti asserted that Syria faced  on behalf of Europe and Syria is now paying a high price for holding on to its principles and its independent decision.
Hassoun also warned against the threat of extremist ideas infiltrating Europe with the support of some governments.
In turn, the delegation’s member said that their visit to Syria is an opportunity to know more about the reality in events taking place away from the misleading Western media, pointing out that the current events revealed that the Syrian people are committed to the culture of life and they have the will to achieve victory.
SANA