military source announced al-Ghariyah al-Gharbiya town in Daraa countryside fully liberated after terminating the terrorist presence in it.
In a statement to SANA, the source said that the army units established full control over the town after killing numbers of Jabhat al-Nusra terrorists and destroying their weapons.
The source added that the engineering units began combing operations in the town, dismantling mines and car bombs that terrorists left behind to ensure a safe return for the locals. 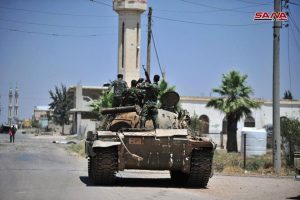 Meanwhile, SANA’s reporter said an army unit targeted with concentrated fire the sites where Jabhat al-Nusra terrorists and its affiliate groups are stationed in the vicinity of al-Jumruk al-Kadeem (Old Customs) area, killing several terrorists and wounding others, and destroying the fortifications they set up in agricultural farms.
In Daraa northeastern countryside, Army units continued intensive operations against Jabhat al-Nusra dens in al-Kark al-Sharqi and al-Mseifra towns, inflicting heavy losses on them amid a dramatic collapse in their ranks following a string of military wins by the Syrian army in the province.