A British woman volunteer with the all-female Kurdish armed unit the YPJ has been killed in Syria, her father has told the BBC.

It is understood Anna Campbell, 26, from Lewes in East Sussex, died on 15 March in Afrin, which has been under bombardment by Turkish forces.
Dirk Campbell said his daughter was “very idealistic” and “determined”.
Turkey has been fighting Kurdish groups on Syrian territory close to its border since January.
Ms Campbell, who was a qualified plumber in the UK, travelled to Syria in May 2017 to help the Kurds, who were battling the Islamic State group.
Her father said: “She wanted to create a better world and she would do everything in her power to do that.”
He added: “I told her of course that she was putting her life in danger, which she knew full well she was doing.
“I feel I should have done more to persuade her to come back, but she was completely adamant.”
British police have repeatedly warned against travelling to Syria, and have advised that becoming involved with any armed group could lead to arrest and prosecution.
Two Britons accused of fighting against Islamic State have been charged with terrorism offences and others have been arrested.

The BBC understands Ms Campbell had originally been involved in the fighting with the YPJ in Deir ez-Zor, where IS have continued to hold the last of their territory.
But in January, Turkish forces began a major offensive against the Kurds along the northern Syrian border.
Many Kurdish fighters left the fight against IS to defend Afrin and some British volunteers are known to have joined them.
Mr Campbell told the BBC he understands his daughter’s Kurdish comrades tried to stop her. 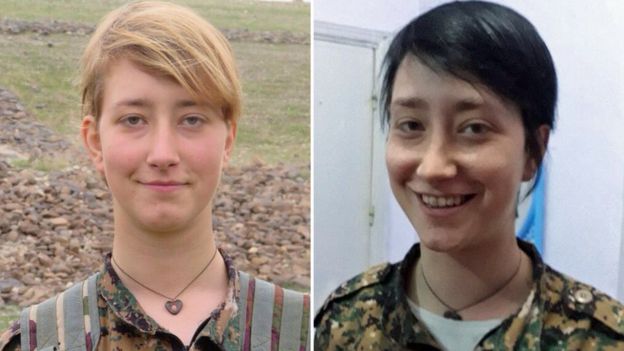 “With fair hair and blue eyes they knew she would stand out, but she dyed her hair black and persuaded them to let her go,” he said.
He added: “I contacted my MP Maria Caulfield as soon as I knew she was in danger from the Turkish bombardment.
“I emailed my MP and said my daughter is in danger, you have to get on to the Foreign Office and get them to put pressure on Turkey to stop.”
Turkey sees the YPJ and associated YPG as an extension of the banned Kurdistan Workers’ Party (PKK), a link that the Kurds deny.
Ahmet Berat Conkar – an MP from Turkey’s ruling AK Party and head of the Turkish delegation to Nato – told BBC Radio 4’s Today programme that the YPG and PKK are “the same organisation” with “the same organisational structure” and “the same leadership”.
He described the PKK as a “very dangerous terrorist organisation” with “an evil ideology” which pushed “young people into the frontlines”.
He also accused the organisation of recruiting child soldiers. 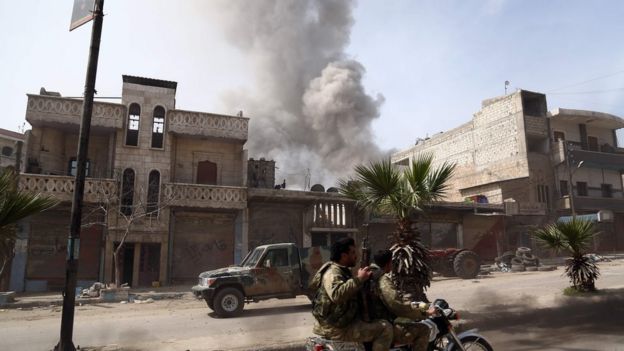 YPJ commander in Syria, Nesrin Abdullah, said Ms Campbell had “insisted” on leaving for Afrin, adding: “Although we tried to keep her far from the frontlines, the attacks from the Turkish state were very heavy.”

Friends of Ms Campbell in Syria told the BBC she was killed by Turkish airstrikes, describing her as a feminist with “sincerity and courage” who wanted to fight for women’s liberation in the Middle East.
She is the first British woman to have died in Syria with the YPG or YPJ, but the eighth citizen to have been killed while assisting the groups.
Mr Campbell said he was “in pieces”, having only heard about the death on Sunday.
He said his daughter had been involved in human rights activism in the UK and it was the Kurdish aim of creating a democratic society in the wake of IS that inspired her to join them.
“When she heard about the political experiment in Rojava [the Kurdish area of northern Syria] this seemed to her to be the way the world should be”
“The social organisation at all levels, the equality. She wanted to help protect that.”
BBC