The ISIS terrorist group could be planning to attack London over Christmas, as revealed by a chilling image intercepted from a terrorist instant messaging chat.

In the image, a black-clad hooded figure is seen standing over a kneeling Santa Claus with an image of the Regent Street shopping area in the background.

A message reads “Soon on your holidays” in English, French, and German.

The implication is that Londoners should expect an attack from the terrorist group over the holiday season. 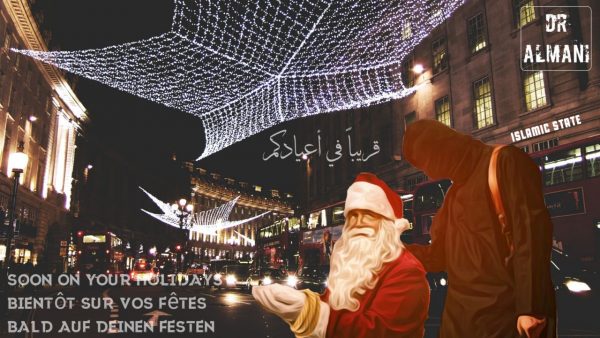 The image was intercepted by BlackOps Cyber, a darknet intelligence company, on Nov. 21.

The company said it was the first time they had seen this particular image. It was posted at 12:27 p.m., UK time, according to a timestamp on a screengrab showing the chat feed.

The screengrab is from a chat group called Army of Mujahideen and shows that the image is seemingly designed by a user called Dr Almani. 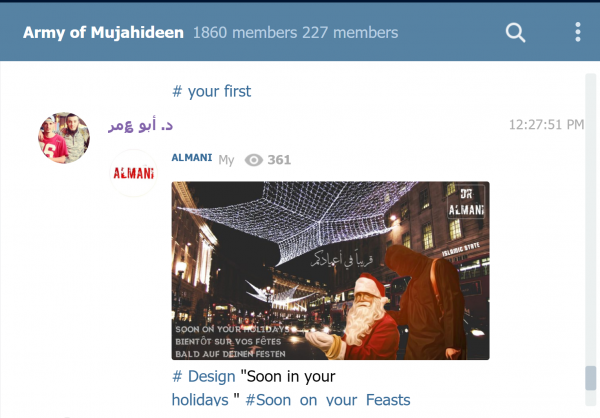 BlackOps obtained the image on the heels of the recent arrests in Germany of six alleged ISIS plotters, who were believed to be planning an attack on a Christmas market.

The six men originally from Syria were arrested on Nov. 21 for plotting an attack involving “weapons and explosives,” according to police, as reported by The New York Times.

The arrests follow terror-related bloodshed at around the same time last year.

German security has been on high alert since the incident, with concrete blocks now installed in several central squares where Christmas markets will be held.

The fact that the image obtained by BlackOps was posted with text in English, French, and German could indicate that, despite the arrests in Germany, terror cells in France and the UK are still active.